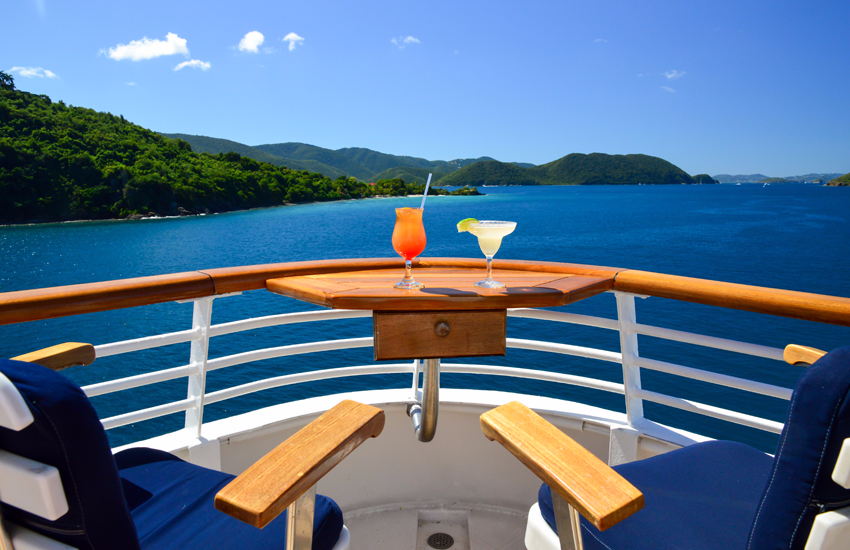 Mini eclairs, canelés, creme brûlée, rows and rows of chaox pastries and chocolate-covered strawberries. In the center, a macaroon mountain, caramelized. It’s an entire rainbow of desserts. And it’s as exquisite to taste as to look at. I’m neither residing in in Homer Simpson’s imagination, nor in a Gatsby party. Neither am I in a French patisserie. Instead, I’m bobbing along the coast of Northern Italy, breathing in the sea-night air, and the scent of sugar… 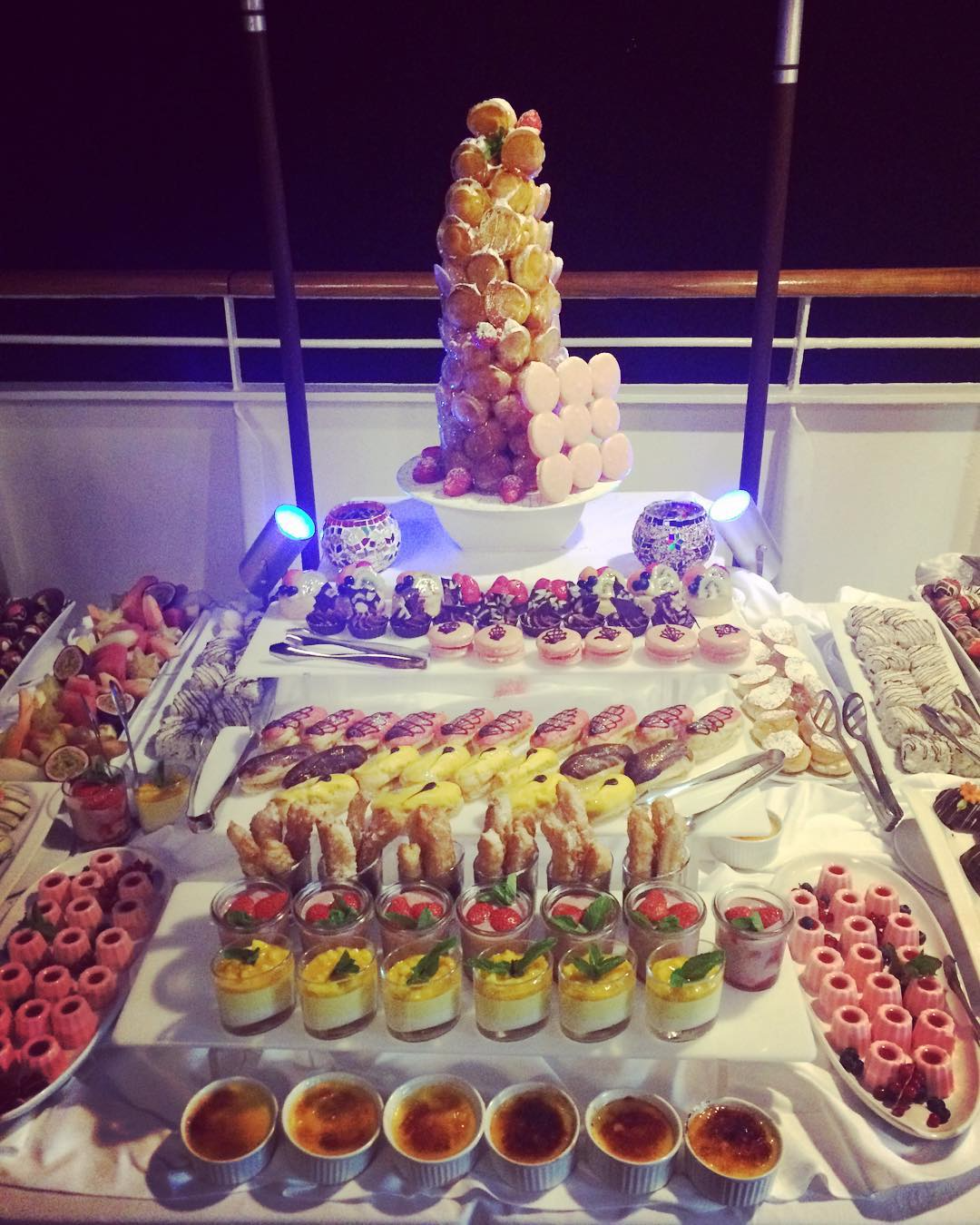 I am, in fact, on the front deck of the six level SeaDream II mega-yacht, enjoying the after-dinner ‘Dessert Extravaganza’, rubbing shoulders with well-heeled travelers from around the world. It’s a peak foodie moment for me. More important, even, than the strawberry and balsamic black pepper ice cream I gorged on at Salt and Straw in Portland, Oregon two years ago. (I wanted to hate it, but I loved it.) These desserts should be ostentatious. But the scene has been assembled with such delicacy and precision, it’s utterly charming. This is the the SeaDream way. Extravagant but unshowy. From service to scenery to dining – especially dining – everything is a statement of sophistication. We sailed with SeaDream around the Mediterranean back in May. Here are five reasons you should give it a try… 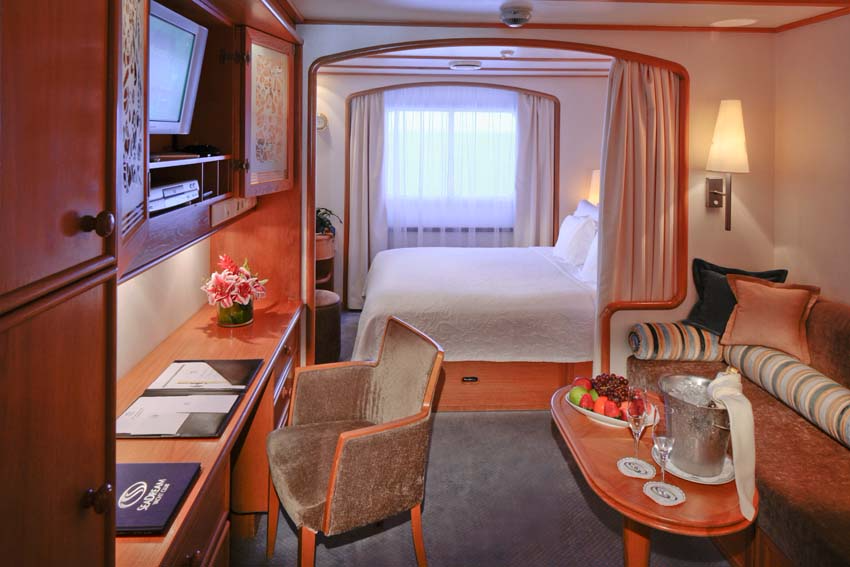 There are 56 ocean-view Yacht Club Staterooms on board. Mine was a comfortable, cozy sanctuary, all warm mahogany panelling and Belgian cotton sheets. Yes, you’re confined – especially in the (marble-lined) bathroom – but welcome to life at sea. It’s unavoidable. And with Bvlgari toiletries, what is there to complain about? Anyway, you soon get used to the size. I’ve actually lived in smaller rooms. At 195 square feet, the staterooms are almost two thirds the size of your average US hotel room (330 square feet and getting smaller, in case you’re wondering), plus space is utilized to optimum effect. My only gripe was I couldn’t see the flip out flat screen TV from my bed properly. 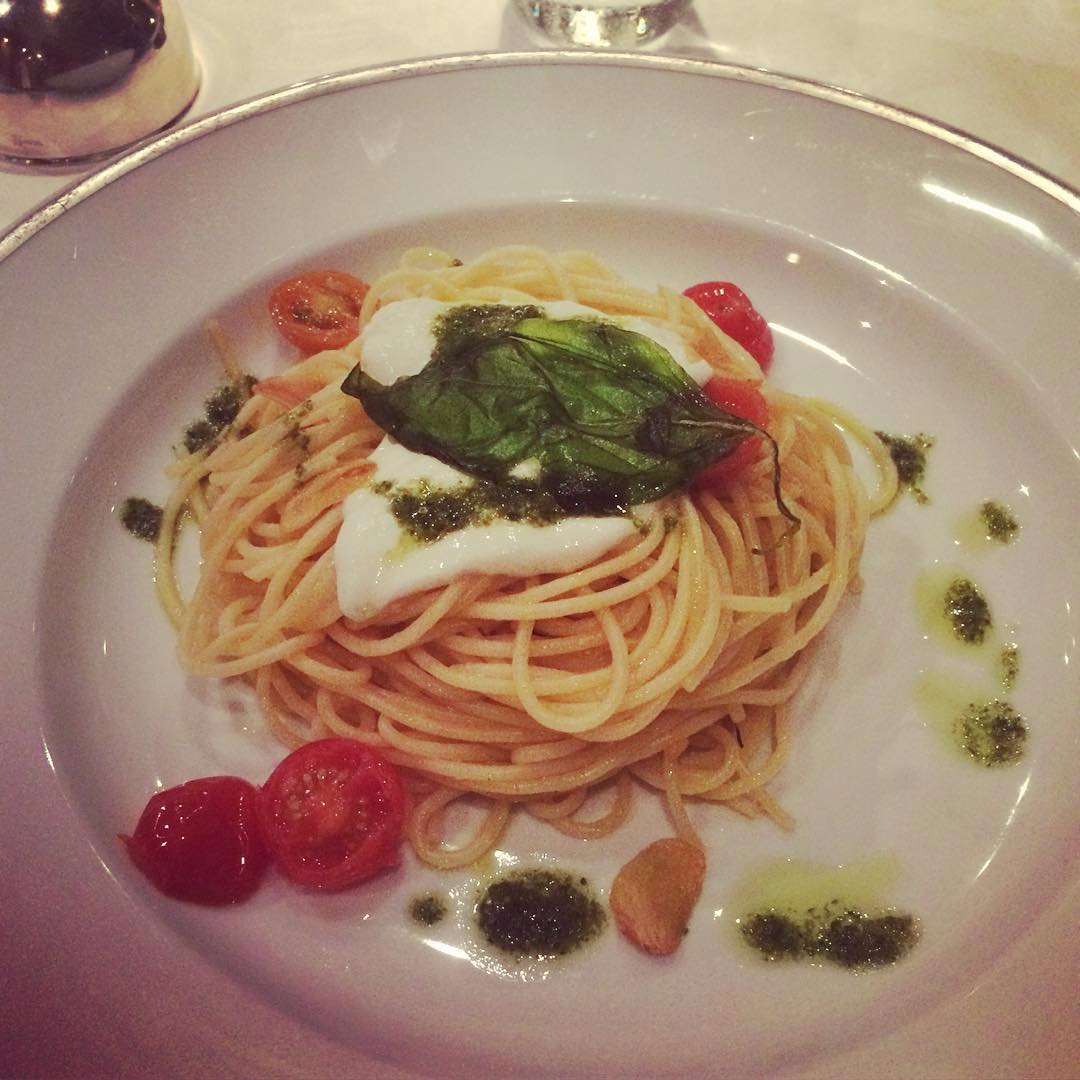 I was amazed at the quality of the cuisine on board. Furthermore, the choice, particularly at the low lit, elegantly-decorated Dining Salon. I’m sure some London restaurant kitchens are comparable in size to the yacht itself (remember, this cruise liner clocks in at just 344 feet). But the food here was better than most. Before reaching our final destination, we made three stops – Portofino, Porto Venere and Livorno, more on which later – and each day, the freshest, most superb local ingredients are collected from the port. 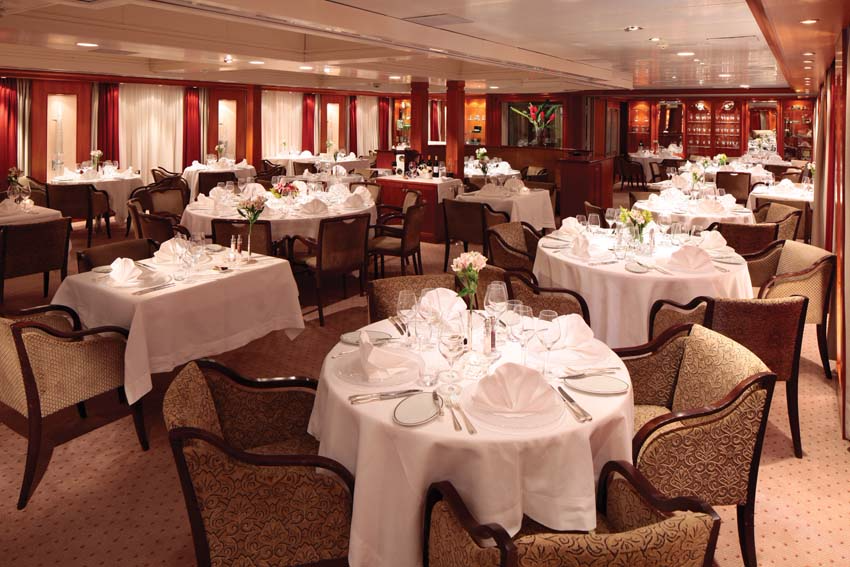 I ate crab, caviar and enough smoked salmon to sink a ship (or yacht). But my favorite dish was a simple one: spaghetti. The balance of vine ripened tomatoes, mozzarella and intense pesto was immaculate. I’ve tried it at home since and sadly my pasta dishes still look like the handiwork of a hungover student. Speaking of alcohol, as it’s all inclusive generally, SeaDream operates an open bar policy. To avoid wasting time through hourly indecision, I stuck with Aperol Spritz (when in/near Rome) and reluctantly declined the quality wine options. (There are specific wine voyages available, FYI). Be warned: drunken behaviour and nasty hangovers aren’t becoming of the environment. Nevertheless, I typically dined al fresco in the day to clear the head. To make up for evening indulgences, breakfast was mainly fruit, while lunch was self-assembled soft leaf salads, bursting with fresh produce: alfalfa sprouts, blanched asparagus, raw carrots and broccoli. Raw, organic and vegan dishes are also available at dinner. 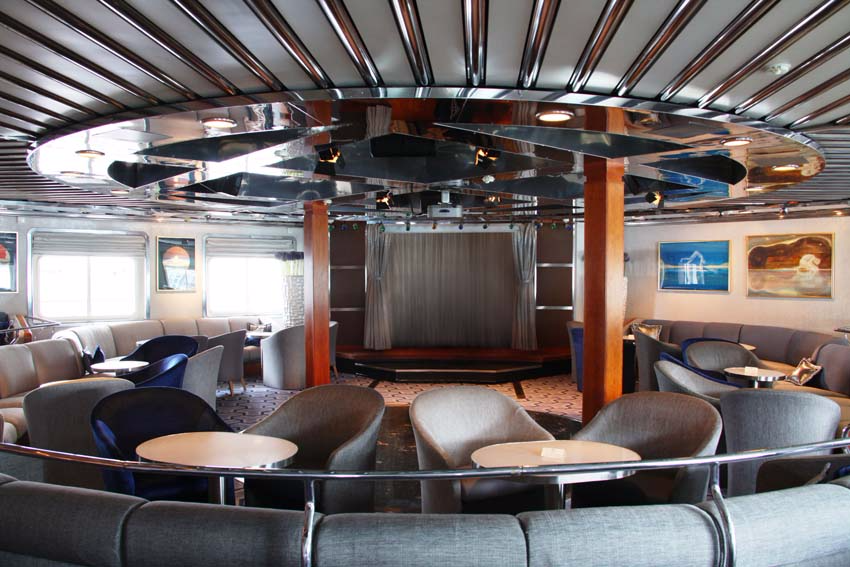 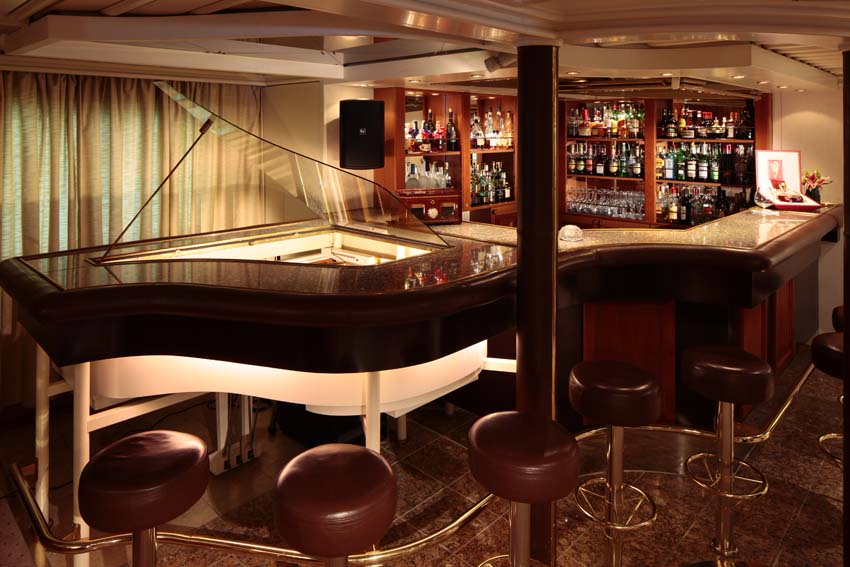 3 The service, the staff, the people

During our four-day voyage from Nice, France to Civitavecchia near Rome, Italy, there were only 112 guests on board, and 95 crew. (To state the obvious, that’s almost one crew member for every guest). As such, yachting in this context is extremely intimate. Thoughts of pulsating cities, busy beaches and gargantuan cruise liners are a distant memory. You make new friends, and bump into them at every turn. When you and three elderly Swedish women storm a cocktail lounge by belting out ABBA hits, all but reclining on the accompanying piano, as I did, you share memories you’ll never forget. You also get to know the crew pretty well. Everyone we dealt with was faultless. In luxury hospitality environments, staff radiate thinly-veiled stress and fear: not so with SeaDream. You get the sense it’s a well-oiled machine, that the hard work goes on behind the scenes. That, publicly at least, the staff can breathe easily, chat away. When I got one deckhand talking on the subject of luxury watches I couldn’t stop him! There are a lot of smart young men in crisp, starched uniforms, and I was charmed by how politely and jovially they referred to my boyfriend and I as ‘gents’. (‘Good morning gents!’ we heard each morning in a different accent). Everyone seemed fully aware that we were a same-sex couple and went out of their way to make us feel comfortable. 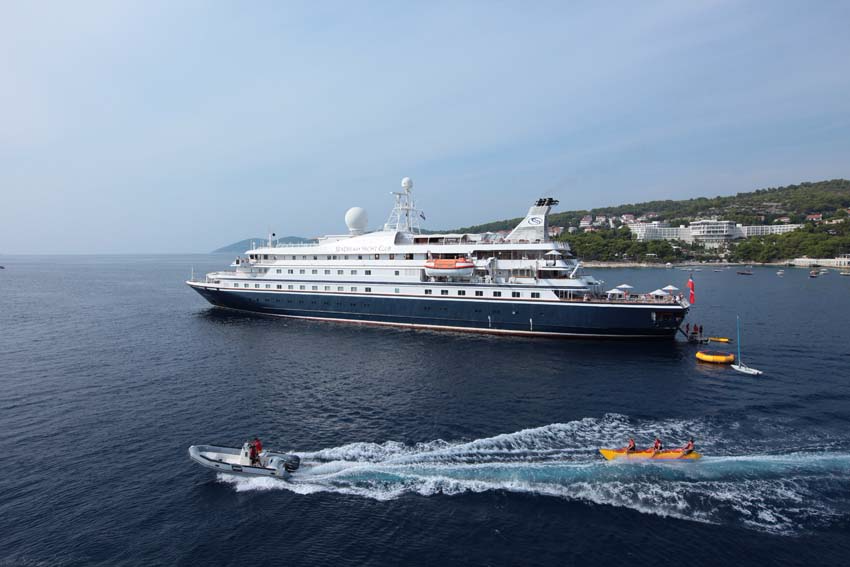 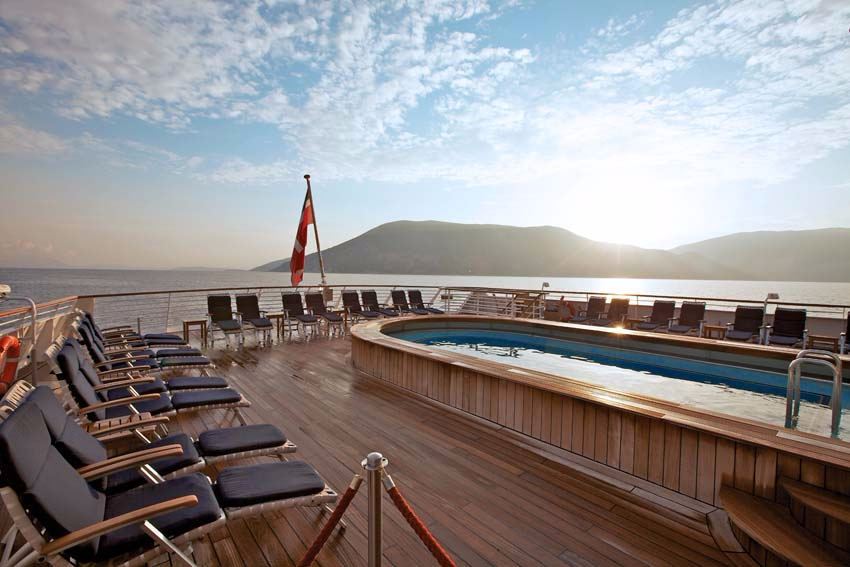 The retractable watersports marina is obviously amazing. If you’re a jet ski/banana boat novice, you’ll inevitably find yourself asking ‘Why not?’. (I also felt that way about the karaoke). Except, of course, these activities are weather-dependant. Furthermore, although they were technically available the week of my trip, as it was unseasonably cold and overcast, I didn’t fancy the temperature of the water. This also meant sunbathing and the swimming pool were mostly out. But there’s still so much to do on board, from the salon to the spa to the casino to the golf simulator. I even enjoyed a tai chi class first thing in the morning – albeit in the library! It’s probably the quietest part of the yacht. I later found myself wiling away an afternoon here, reading books and magazines without a care in the world. 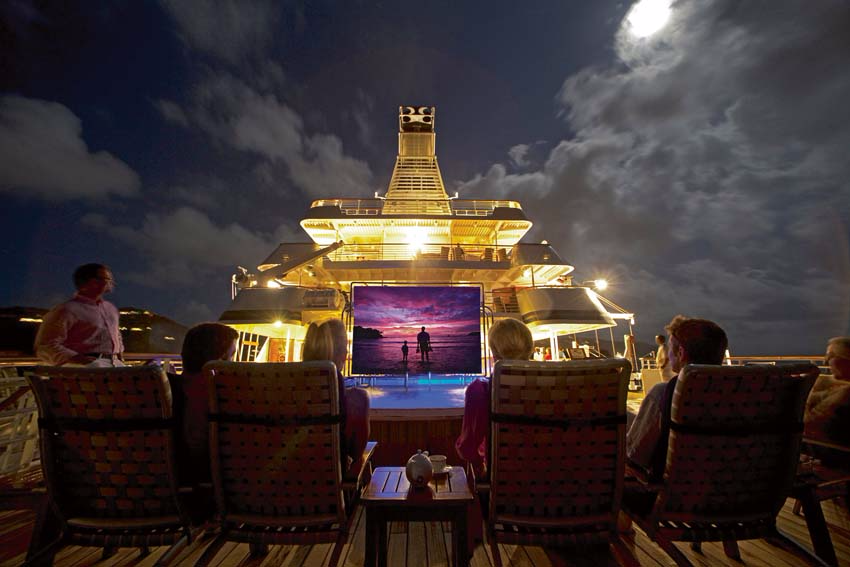 One activity I was gutted to miss was the open air film screening due to rain. Instead we picked a movie from the yacht’s collection – The Adventures of Priscilla, Queen of the Desert, of all things – and watched it in our room.

SeaDream’s slogan is ‘it’s yachting, not cruising’. But in both cases, the USP of boat travel is the opportunity to take in multiple destinations with minimal organization. The company offers a wide array of onshore excursions. Think gondola rides in Venice, flamenco shows in Seville, helicopter rides in St. Lucia. However, they only go ahead if enough people sign up for them, as we discovered to our disappointment. This is perhaps the only drawback of such exclusivity. Nevertheless, you can borrow a mountain bike with no fuss – the deckhands even carry it onto the passenger ferry for you – allowing you to explore the shores at your leisure. Here’s what we got up to… 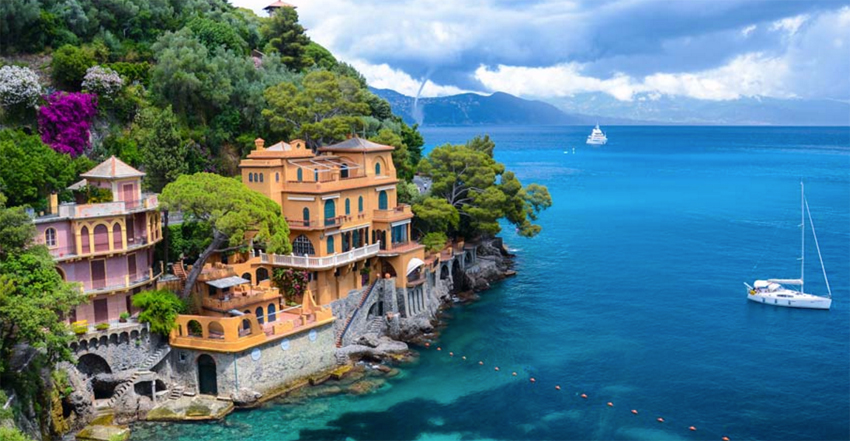 On day two we stopped in the lavish Portofino [above]. Once a fishing village, this picturesque harbour, population 439 (!), is now the epitome of the Italian Riviera, luxury boutiques and all. We couldn’t take our eyes off the opulent cliffside mansions. When really, we should have been looking out for errant sports car drivers. (There are plenty of them). We attempted the two-hour walk to the gorgeous-looking San Fruttuoso abbey but got up too late. 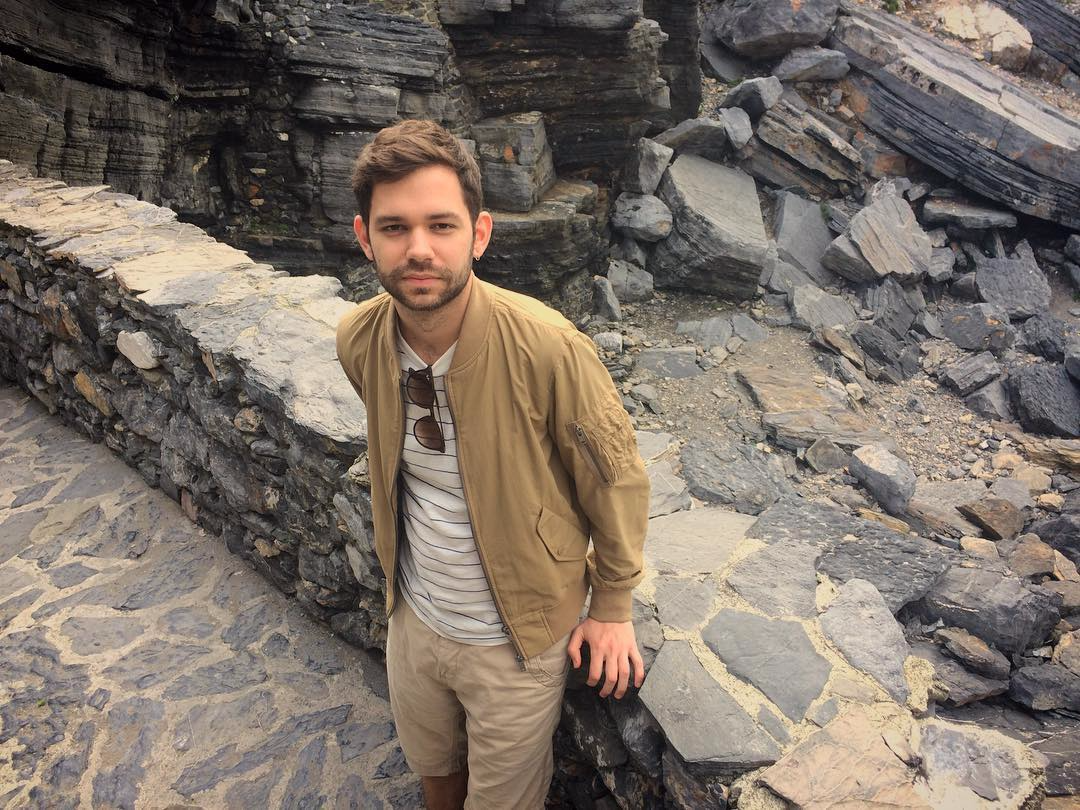 Fortunately, we had a fuller day in Porto Venere on day three, which I preferred. This UNESCO World Heritage Site has a population of 3,763 and plenty of tourism infrastructure. It’s worth checking out for two main reasons. Number one: the rugged natural wonder that is Byron’s Grotto (a former rumination spot of Lord Byron) pictured above. Number two: the flavorful olive oil samples available at every turn. Porto Venere is famous for the stuff. 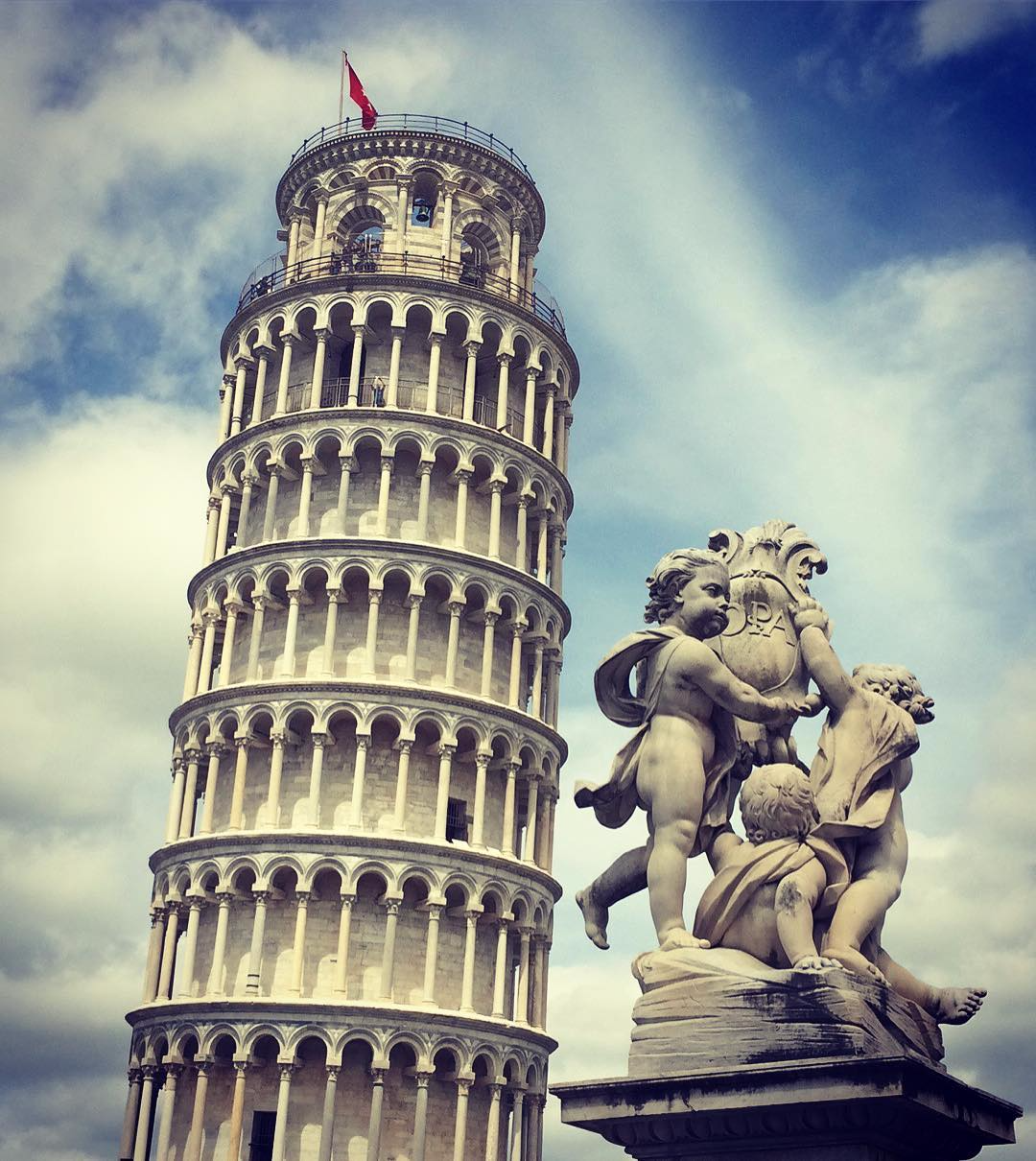 Finally, rather than hang around the port city of Livorno on day four, which has nothing on Porto Venere or Portofino aesthetically, we jumped on a train to Pisa. We were there in 20 minutes. It’s about 40 in a taxi. Obviously we didn’t have long (long enough to be overcharged for a pizza and an Aperol Spritz, though – I couldn’t wait to get back to the yacht), we did have time to experience the Tower of Pisa, built in 1173. Climb those 284 iconic steps for a breathtaking view of the city and the mountainous scenery thereafter. Given this is something we hadn’t actually planned – it happened spur of the moment – the Tower now has a special meaning for me. It no longer simply represents otherworldly Italian architecture, so beautiful it defies comprehension (yes, it really does tilt 4.5 meters at the top). It now also represents the surprises in store when you travel by boat. SeaDream spends the summer months in the Mediterranean and the winter months in the Caribbean. Prices start from £3,519 per person based on based on double occupancy for a seven night Mediterranean voyage in 2018. 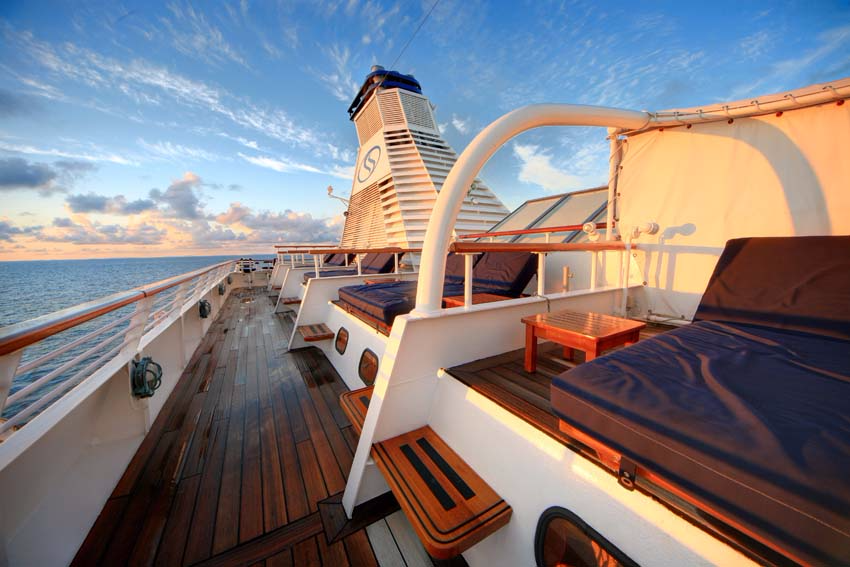