Treasures of the Medoc vineyards with Dewey Markham Jr. 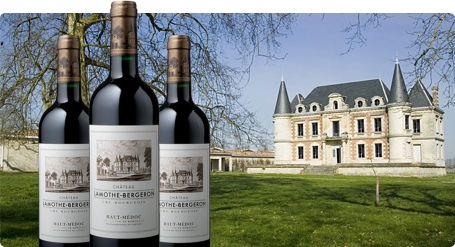 Discover 2 treasures of the Medoc vineyards on a visit to the world-famous First Classified Great Growth Château Mouton Rothschild and the Cru Bourgeois Château Lamothe Bergeron wineries. Your famous guide today is the renowned wine expert and author Dewey Markham Jr. who will share with you his insight and the secrets of the Medoc wine estates, and of their 1855 Classification. The yacht will pause in Pauillac, a quaint village on the Gironde estuary, to tender guests ashore for an exploration in the heart of the Medoc vineyard region; the most powerful and important source of profoundly complex and age worthy wines. The distinguished wine author Dewey Markham Jr greets you ashore in Pauillac. Dewey has lived in the Bordeaux region since 1993 and wrote the book “1855: A History of the Bordeaux Classification”, which won the James Beard award for wine book of the year. All the red wines listed in the 1855 Classification, except one, are produced in the Medoc region. Medoc’s vineyards are maintained to near perfection and its world-famous château’s produce wines that are a connoisseur's dream. The first stop, Château Mouton Rothschild, gives you the opportunity to visit its refurbished cellars, the Museum and a special exhibition. Château Mouton Rothschild is an extraordinary family estate featuring a history as remarkable as its wines and boasting magnificent vintages and an exceptional wine museum. The late Baron Philippe (from the English branch of the Rothchild family) took the helm of the estate in 1922, and in the following years made it one of the world’s most respected and written-about wine chateaux’s. In 1973, Mouton Rothschild became the first of the second-growth vineyards to be promoted as a Premier Grand Cru Classé. Explore the new vat house, the cellars, the great barrel hall, and learn more about wine with an explanation on winemaking techniques before wandering through the compelling “wine in Art” museum. You will also discover the exhibition of the original paintings for the labels (designed by artists such as Chagall, Miro, Picasso…). Enjoy a private tasting of their 3 wines, including a recent vintage from Château Mouton Rothschild. Continue your journey along the Wine Château Road through the Medoc vineyards. Next stop is at the Château Lamothe-Bergeron winery in the Haut-Medoc vineyards. Deemed to be one of the leading Cru Bourgeois Superior Wines of the 19th century, Lamothe-Bergeron has always been a benchmark Haut-Medoc wine. The estate’s history began with Jacques de Bergeron: the enlightened scientist acquired the estate in 1773. He was interested in anything related to nature and agronomy: fertilizers, exotic trees, acacia, insects, etc. He was also passionate about growing wines, and Château Lamothe-Bergeron was a place where he could conduct his experiments. He published a study on ways of grafting vines in Bordeaux which eventually gave rise to the Bergeron Method. This method was still being used during the early 20th century. After a year of renovation, this 19th century castle receives visitors for a unique experience among the Bordeaux wine region. After the tour of the cellars and of the estate, you will enter the 19th century fairy-tale castle to enjoy another private tasting of 3 vintages of Château Lamothe-Bergeron paired with appetizers and a surprise. Rejoin the coach traveling down the famous Chateaux Wine Route viewing magnificent French castles and chateaus on both sides of the road; each one more beautiful and elegant than the other. Reflect on the many treasures discovered today with fellow SeaDreamers as the coach returns to the repositioned yacht now docked in the Bordeaux city center.

Notes: Flat, comfortable shoes are recommended. This tour is not suitable for passengers with walking difficulties due to possible steps at the wine estates. A minimum participation is required to operate all Yachting Land Adventures, and some may have limited capacity.