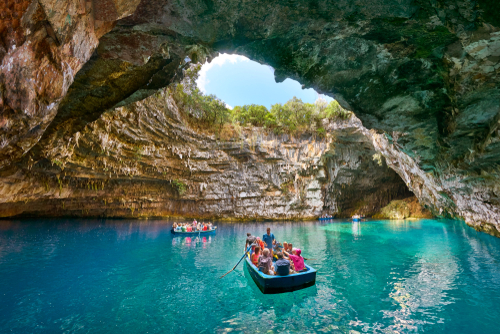 Revel in the highlights of Cephalonia such as the amazing Melissani Lake and the remarkable cave of Drogarati, while enjoying scenic views and a Greek lunch in a Greek village.

Cephalonia Island is famous for its unique geological phenomena such as caves and underground lakes.
Starting from Fiskardo, you take the main road and head south to the small village Karavomylos where the mysterious, 40,000-year-old, under-ground lake of Melissani is located. After an earthquake, the ceiling of the cave fell in, creating what may be one of the most impressive sights you have ever seen. Boats will wait for you at the shore to take you around the blue-green waters of the lake and the boatmen will amuse you as they will compare the stalactites to various animals in a humorous way.
After visiting the lake, you will travel to the close by Drogarati Cave. The Cave was Discovered 300 years ago when a part of the cavern was destroyed by an earthquake. It descends to a depth of 200 feet and features an impressive interior of stalactites and stalagmites. Reaching the cavern’s interior by a spiral staircase, you will stand awestruck at the scene that greets you, accentuated by carefully placed, concealed lighting. A second chamber, called the Chamber of Exaltation, boasts superb acoustics and hosts concerts for many people.

Heading north, you pass by the area of Myrtos Bay where there is a photo stop and glimpse of the most beautiful and unique beach in Greece. Next stop is at the tiny picturesque village of Assos, built on the neck of an enchanting peninsula. Admire the tiny houses roofed with red tiles and the Venetian fortress crowing the hilltop of the village. Here you can stroll the picturesque little streets and browse the shops during free time, after enjoying a delicious Greek style lunch at a village restaurant before heading back to the SeaDream Yacht in Fiskardo