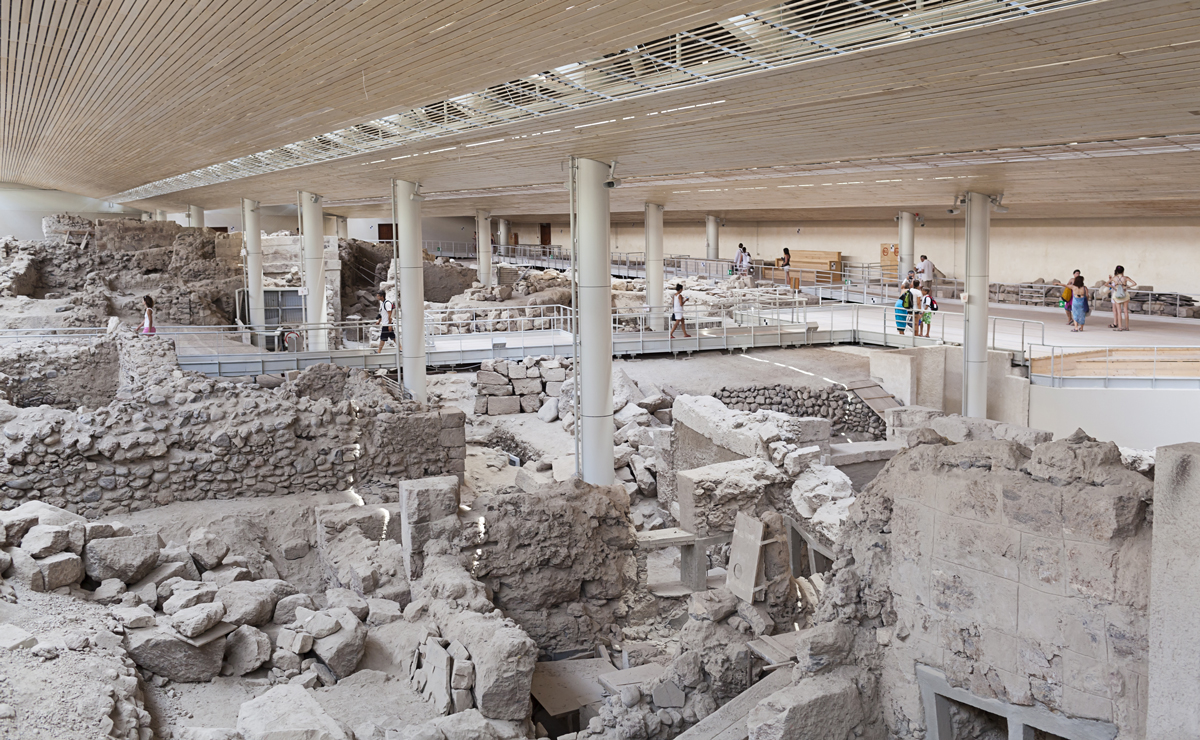 On this land adventure, discover the picturesque village of Oia and one of the most important prehistoric settlements of the Mediterranean: Akrotiri Archaeological site. Could Akrotiri be the lost city of Atlantis?

One of the reasons Santorini has attracted the world’s attention is the excavation at Akrotiri, which reclaimed a whole prehistoric Minoan city from the volcanic ash. The prehistoric site of Akrotiri is on the south-western tip of the island and was discovered in 1967 by Professor Spyros Marinatos. The city was buried by the Theran volcanic eruption in the middle of the second millennium BC.

Over the years, excavations have brought into light a remarkably well-preserved site with two and three-story homes decorated with marvelous wall paintings and frescoes, an advanced drainage system and many interesting objects, artwork, pottery and furniture which give a picture of a society which was very well organized and at the peak of prosperity. This was interrupted suddenly by the eruption of the volcano, which buried the entire city. An ambitious modern bio-climatic roof top structure protects this important archaeological settlement where excavation works are still in progress.

After exploring the excavations with a guide, ride to the northeast part of the island and its most picturesque town, Oia. Built high up on the ridge of red rocks, it offers breathtaking views of the blue Aegean. Take a stroll around the narrow streets with the old beautiful houses and the tiny picturesque shops. Enjoy the breathtaking views of the caldera cliff and wander in the narrow streets for shopping or a cup of coffee during your free time in the village.

The guide visit ends in the town of Fira. Wander along the edge of the caldera for amazing views or wander through narrow streets with the various shops. When ready, take a cable car or walk along the path down to the small port of Skala Fira for tenders back to the SeaDream yacht.

Notes: The site may be closed on Mondays although SeaDream generally can get exemptions. Kindly double check with the Club Director on board. A minimum participation is required to operate all Yachting Land Adventures and some have limited capacity. All adventures in the SeaDream Yachting Land Adventures program are subject to change. Not all of the land adventures shown will be offered on all voyages and departure times are subject to change. Final departures times will be published onboard.