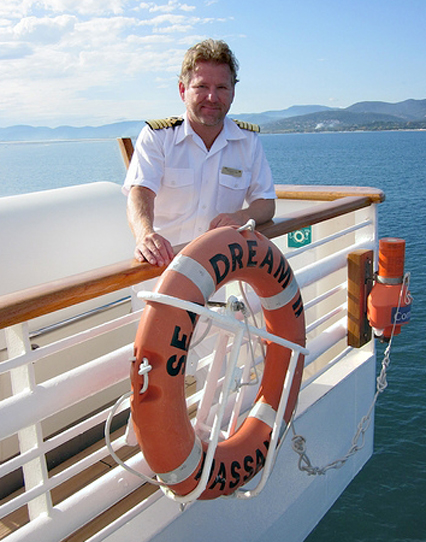 Captain Lund’s story begins like so many other Captains… “He grew up in a small Norwegian coastal town.” The town is named Brønnøysund.

He made his first pocket money by working on his uncle’s fishing boats. At 17 years old he signed on as a deck boy aboard a huge crude oil tanker; 150,000 gross tons. “We needed bicycles to move from one end of the vessel to the other!” he recalls. “There was a lot of hard work, but I found the life very exciting. We called on many exotic ports and I met lots of different people. “

There was no turning back for the young Norwegian. He knew he wanted to have a career at sea and he continued to work aboard car carriers, chemical tankers, gas tankers, and general cargo and container vessels. In 1991 he worked aboard his first ship that carried passengers. “This was a vessel that carried both passengers and containers and I realized that I liked the passenger part much better than the container part.”

Torbjørn has worked aboard passenger vessels ever since, including RCCL’s Splendour of the Seas and Fred Olsen Cruise Line, a fleet of small ships sailing worldwide. “I get to talk and dine with guests from all over the world – guests with a range of different ages, occupations and hobbies. I find this very interesting.”

He calls Sweden home now; living on the coast just 10 minutes from the Norwegian border. He enjoys keeping fit and being outdoors with his wife and his water dog. He and his wife do a lot of traveling; Thailand and Brazil being their favorites. “I have sailed along the Brazilian coast for many years. I love the nature, the people… and I have many friends there”.

If the Captain has a moment, ask him to tell you about how he experienced hurricane Opal in 1994. It’s a heroic tale that has the makings of blockbuster Hollywood action film.