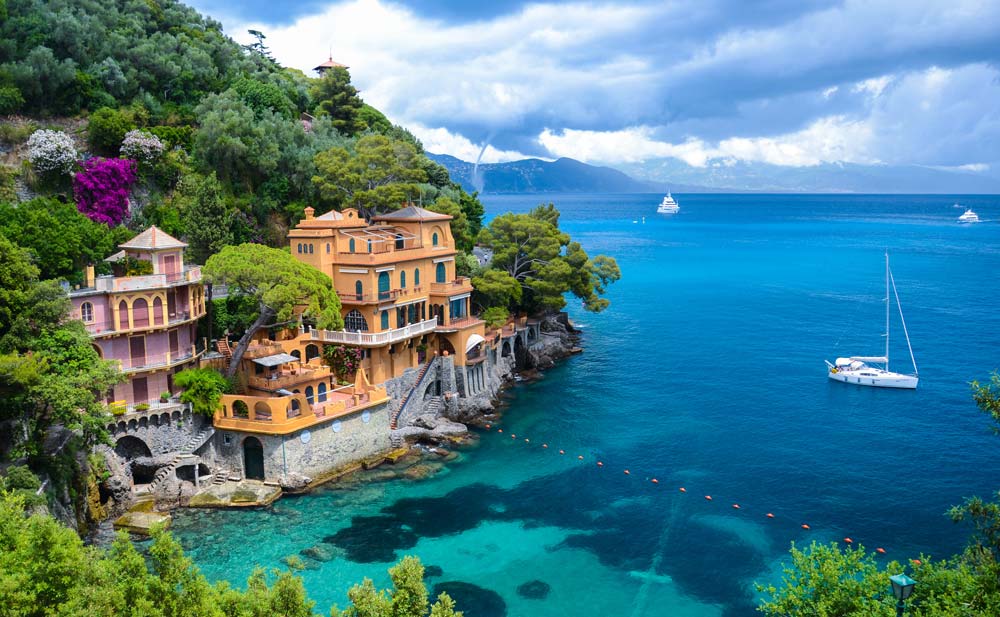 The picturesque fishing village of Portofino can be found along the Italian Riviera, and is one of the most popular resort getaways in all of Italy. Portofino has been a staple of tourism in Italy since the 19th century, officially replacing fishing as its chief industry in 1950. Portofino is twinned with Kinsale, Ireland, and Palma (de Mallorca), Spain. Roman philosopher and military commander Pliny the Elder declared that Portofino was founded by the Romans, and with the high concentration of dolphins found in the Tigullian Gulf, it was named the “Port of the Dolphin” - Portus Delphini. Portofino was primarily a member of the Republic of Genoa in early days, and never provided more than a resting area for the merchant navy due to its naturally cramped harbor. The Republic of Florence purchased Portofino in 1409 from French King Charles VI, yet returned when the Florentines were ousted. Portofino became a part of the Kingdom of Sardinia in 1815, and during Risorgimento, it became a member of the Kingdom of Italy in 1861. Aristocratic visitors from Northern Europe began visiting the town in the 19th century, leading to eventual vacation homes and celebrities appearing in Portofino. Portofino is naturally beautiful port with colorful, iconic architecture that was even replicated as a hotel resort at the Universal Orlando Resort in Orlando. The Tokyo Disney Resort in Japan also created a seaside town based on Portofino. Tourists like to visit the museum Castello Brown, which provides a great view of the town, as well as the churches of St. Martin, Oratorio di Nostra Signora Assunta, and St. George - the latter containing some relics of saints. When visiting Portofino, be sure to take a guided dive to the Portofino Marine Park, as well as take a glimpse at the recently restored famous underwater statue, the Christ of the Abyss.